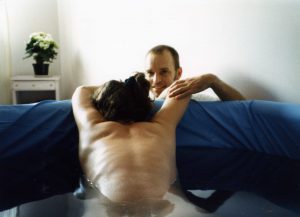 I woke at around 2:30am to go to the toilet (again!) and on my way there my waters broke.  At first I didn’t realise what had happened but strong regular contractions kicked in a few minutes later which left me in no doubt.  Thinking that I had hours of labour ahead of me, I decided to let Jaimie have a few more hours of sleep and set myself up in the bathroom with a watch and pen and paper.

The contractions were already coming really close together, each one seemed to merge into the next, and in no time an hour had passed.  I thought that I’d wake Jaimie so that he could begin to fill the birthing pool which can take over an hour.  Jaimie leapt out of bed and went into action, running a hose from the bath to the pool, emptying the hot water tank, waiting for it to refill and reheat, and emptying it again.  Once I had realised that I was in labour I had turned on the water heater, so the first tank of water was boiling hot.  Jaimie valiantly struggled to sort out the plumbing, be with me every few minutes at each contraction, time them, and smooth out the birthing pool lining which was now poorly aligned and weighted down with scalding hot water.

Jaimie telephoned Mum and we also decided to telephone our midwife Val, just in case she was still in London and would need advance warning of our imminent birth.  She asked Jaimie if the pain was manageable (by this time there was no way I could use the phone) and I thought, ‘barely, but if this is how I feel at the very beginning of labour, then I’d better define this as manageable or I’ll never make it through the hours ahead.’

She decided to come out anyway just to see how things were going.  Jaimie also called Kay.  Mum arrived first as she was only a few minutes away and she took over being with me at the height of each contraction so that Jaimie could sort out the birthing pool lining.  He was concerned that more water would only drag the lining down further and we’d end up with a flooded bedroom as well as a baby.  I told him, in no uncertain terms and with a minimum of words, to just fill the pool.

Luckily Kay arrived soon after and was able to give Jaimie the support he needed as he battled with the lining, the pump which was refusing to work, putting films in the cameras and the sound of me in pain every three minutes.  Things were pretty intense.  My contractions were continuous, no sooner had one eased off and the next one started.  This is not what I had been led to expect; I thought that the deal was that you had a minute or so of agony followed by a few minutes breathing space.  Not so. I also found that I had to stand (I couldn’t even contemplate any of those supported squatting positions that we’d practiced) and each time my legs and arms shook until I thought that they would give way.

By the time the midwife arrived all I could think about was to get into the pool.  In her visits we had discussed the importance of not getting into the pool too early as it could slow things down and she reminded me of this.  After all, I had only been in labour for just over two hours.  I was resolute, however.  I knew without question what I needed.  I felt confident and sure.  My body was just doing it and I just had to follow; and I needed everyone around me to trust and follow too.  She suggested that she examine me to see how far things had progressed and I lay down on the bed for all of two seconds before jumping up and saying that any examination would have to be carried out with me standing.  Val gently told me that this would not be possible, and then Kay, bless her, reminded Val that I had asked to have no examinations unless absolutely necessary. So Val trusted my conviction of what I needed and I got into the pool.

At that point I wanted Jaimie.  I yelled out for him to come, now.  He held my hand and spoke encouragingly to me – the things that I had suggested to him beforehand that I might need.  “Don’t talk to me during a contraction” as I squeezed his hand beyond repair.  Almost as soon as I got into the water I felt the urge to push.  Unexpectedly,  I didn’t want anything from the people around me except for them to be exceptionally still and quiet and very present.   I was noisy.  I remember thinking, “I’ll sing this baby out.”  It was very painful and at one stage I remember thinking, “Oh, I’m going to leave this lot to it.  I’m going to leave my body and float out the window.”  I think I announced my intention to go out the window.  At that point Val measured something not good happening with the baby’s heartbeat and instructed me to “stay in the room, stay in my body and to give birth to my baby”.  That got me back in and I started to push in earnest.  I remember reaching down and feeling the baby’s head, but after each contraction it didn’t seem to have moved any further.  I said that I felt stuck, like I would never be able to do it.

Val gave me a remedy and things shifted.  Then I really pushed and sang and pushed.  I felt terrific.  I felt like I could expand and expand and give birth to the world.  I felt fantastic.  I felt strong and capable and was loving giving birth to my baby.  And then the head was out.  Val said to pause, wait for the baby to turn.  But I was going for it, enjoying pushing, impatient to see our little one, and kept on pushing.  Moments later I felt a terrible stinging as I tore slightly, as the rest of our baby’s body was born.  Val gently ushered him through the water, back between my legs, so that I could take him.  I held him under the water a while, his big blue eyes looking up at me.  It was the most timeless, amazing, precious moment. 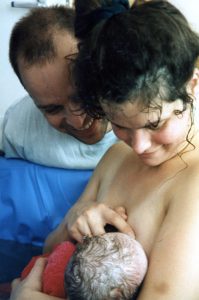 The early morning light was coming through the curtains and we were quiet and still.  Not long afterwards our little baby routed about and started to suck at my breast.  I didn’t notice the blood, but the pool turned red, and Val instructed me to get out of the pool as I was bleeding and the placenta didn’t seem to be coming.  I was really reluctant.  I felt no worry for myself, I just wanted my baby to be able to stay safe and close in the warm water.   With some difficulty and holding our baby close I climbed out and sat by the side of the pool.  I continued to breastfeed.  Val began to draw up an injection to encourage the placenta to be expelled and hopefully stop the bleeding.  She knew that it was really important to me to have a drug-free natural birth and so gave me another remedy first and allowed one minute for it to work.  It did.  A few more contractions and the placenta came out and the bleeding stopped.  Sometime after this, Val coached Jaimie in cutting the cord.  It was only as I held his little body away from mine for the cord to be cut that we discovered that we had a boy!  We wrapped our baby in a soft cotton sheet and all climbed into bed together.